Some of the best teaching is done through story telling.  Folktales, fables and fairy tales have been told and retold for centuries.  They have been told simply as entertainment as well as presenting an important lesson to be learned. Sometimes the lesson or moral is obvious, but usually, the lessons are subtle and have many layers of meaning. That's why these tales have such timeless appeal.  Folktales from cultures around the world can help broaden our understanding of different times and places.  Besides, these tales are pure entertainment!

​Included in this series are stories from Germany, Norway, ancient Greece, and Renaissance England. Because these stories have been used by teachers for generations to teach practical lessons in literature, language arts and writing, I thought it would be good to include Lesson Plans with ideas to support the Common Core Objectives for ELA (Elementary Language Arts).  Music and Drama teachers will like the musical styles and acting technique activities.  Home Schoolers will like having the whole package for use as a fun Co-op Enrichment Activity.  Art and coloring activities are included, as well.

Each 15 minute Mini-Musical is designed to be performed in a variety of ways - from Readers Theater to an In-Class Presentation to part of a Chorus Concert or a Drama Class Recital.  The shows will appeal most to the middle to upper Elementary Grades (2-5), but may, with effort, be presented by the younger grades, too.  Sets and Costuming may be as simple or elaborate as time and budget allow.  The songs are catchy and designed to evoke the historical time period and culture of each story.  Acting Games, simple movement (choreography), puppetry, and playing rhythm instruments add to the whole experience of putting on these shows.  It may take up to 10 hours of teaching sessions to mount one of these Mini-Musicals depending on how many of the Activities you choose to use. 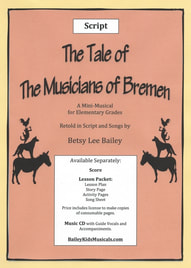 ​The Tale of the Musicians of Bremen

This Mini-Musical is a lively 15-minute classroom presentation.  The Script has parts for a flexible cast of 10 or 11 children with the rest of the Class singing the songs as a Chorus. The Music Teacher will like having a mini lesson on German folk music and Polka dancing. This story may be presented as an in-class Play complete with sets and costumes, or as a Reader's Theater or even as a section of a Chorus Concert. 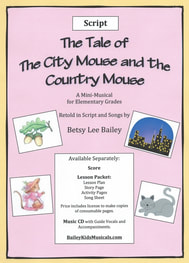 The Tale of the City Mouse and the Country Mouse

This 15 minute Mini Classroom Musical casts two girls in the lead roles.
That is rather unusual for Children's Theater!  The script calls for a flexible cast of 10-16 students with the rest of the class singing the songs and providing sound effects and playing rhythm instruments.  ​ 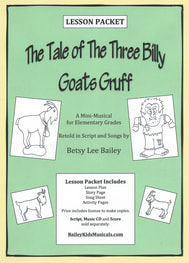 The Tale of the Three Billy Goats Gruff

Retold in script and songs by Betsy Lee Bailey

This 15 minute Classroom Musical is a play within a play.  The Norwegian folktale is acted out as a puppet show by children who are stuck indoors on a rainy day. The cast calls for two girls and 2 boys and a "mother."  The rest of the class sings the songs along with the actors.  This piece would work well as a portion of a Chorus Concert. The songs feature influences from Norwegian composer Edvard Grieg as inspiration. 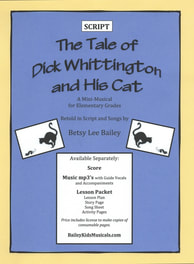 The Tale of Dick Whittington and His Cat

This​ Mini-Musical is a lively 15-minute classroom presentation.  It is an example of an Old English Pantomime from the Elizabethan Era.  Especially interesting are the Stock Players, the characters that were present in nearly every Pantomime of the age.  Explanations and background information are given in the Script and Lesson Plans.  The Script has parts for a flexible cast of 14+ children with the rest of the Class singing the songs as a Chorus.  The Music Teacher will like giving a mini lesson on Renaissance Music and instruments of the time period. 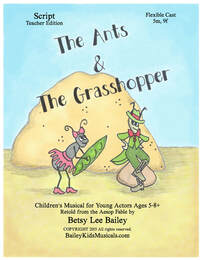 The Tale of the Ants and the Grasshopper

Retold in Script and Songs by Betsy Lee Bailey
​
This 15 minute short may be performed as a stage or in-class show.  Costumes may be very simple such as black knit pants and black T-shirts for the Ants and something green for the Grasshopper.  Extra students can be more ants.  Scenery may be very simple.  I have used a screen, a large painted cardboard box, or a painted set suggesting an ant hill.  It just needs to be large enough for the ants to hide behind.  One production group had the kids paint their own scenery and props (large seeds, flowers, snowflakes and leaves.)  This little show is quick to produce with only three songs and two dances.  The Ants' lines may be spread out over more actors.  The strongest singer/dancer should be the Grasshopper.
Bailey Kids Musicals copyright 2015