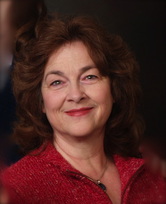 What do you do as a mother of a large family and have limited funds and even more limited means to get your children to all of their extra-curricular activities?  The answer for me was to put them all in Children's Theater together.  Where else could the children get experience in singing, dance and drama as well as opportunities to develop essential qualities like working in a team, being generous with others, and taking personal responsibility when others are counting on you?

When the oldest five of my seven children were young, we lived in an area where distances were great and opportunities were few and far between.  Fortunately, we got involved with a wonderful Children's Theater company, Ariel Theatrical in Salinas, California, that did incredible productions.  I had the unique opportunity to work with and learn from the director there, Gail Higginbotham, who had great insights into the power of positive theater in the lives of young people.  The shows were fantastic, but the behind the scenes organization was even more impressive.  Gail's work and ethic have been the standard for me to look up to in my writing.

We later moved to Bel Air, Maryland, and were fortunate to find another wonderful Children's Theater company, Theaterworks...Live!  The director, Patty Richardson, has been another tremendous mentor for me.  Her positive face amidst the "chaos of creativity" has been exemplary.  Not everyone is suited to taking a bunch of squirrely kids and shaping them into an artistic triumph.  She is a master and I thank her for all the opportunities she gave me to work and learn beside her.

The photos above are of my two youngest children.  They practically grew up  in the theater.  Cami used to come to rehearsals as a toddler and be perfectly content watching.  She has become quite the triple threat -- acting, singing, dancing, and even writing and directing shows of her own.   Mitchell's voice is the child's voice you hear on some of  the recordings.  He always preferred the idea of being cast as Guard #4 or unnamed Villager #6, but his talent and voice (and because strong male actors are rare in Children's Theater) he often had leading roles.  Poor kid, he didn't have much choice.

My own experience in the theater began with my first role as a baby in a play.  They needed a baby to cry on cue. I got the job when I was just two weeks old.  My mother was a beautiful singer and talented accompanist.  She could play the piano by ear just hearing a song once.  Fabulous memory.  She had me performing on shows from my infancy.  At the drop of a hat, she would have me sing for anyone, anytime, anywhere.  Some of my first memories are of singing a Shirley Temple tap dance routine for the shoe salesman in J.C. Penney and singing for my Trick or Treat candy at the neighbors' house on Halloween.  (No one told me that we didn't show our talents as tricks for Halloween.)  My friends and I produced and directed our first Musical Play, "Peter Pan," for our Elementary school in 5th Grade.  I wrote the script taking bits and pieces from many sources and scavenged songs from both Disney and Broadway versions. Judy, Stanley, and I taught the songs and dances and staged the scenes.  We did have my mother play the piano for us, though.  Here's proof: 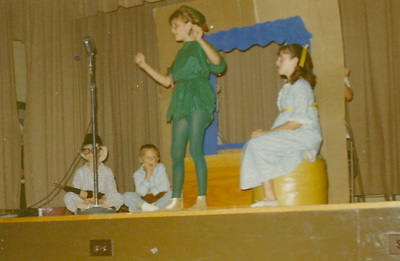 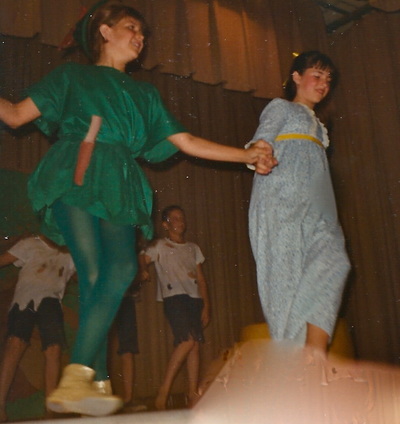 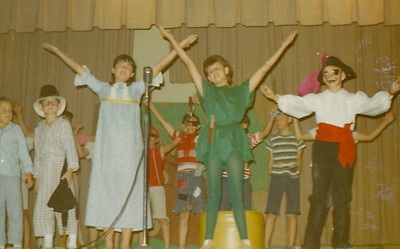 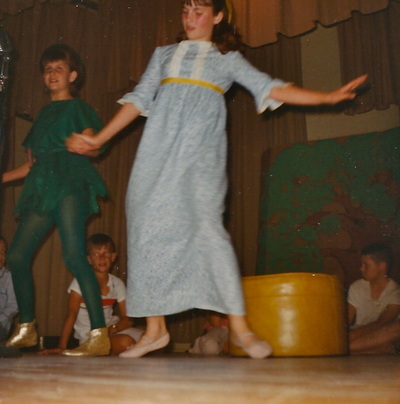 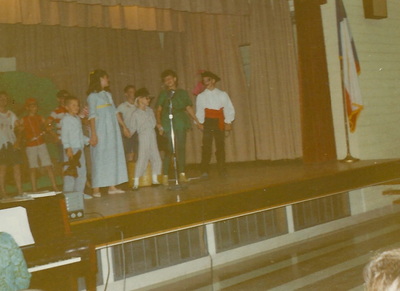 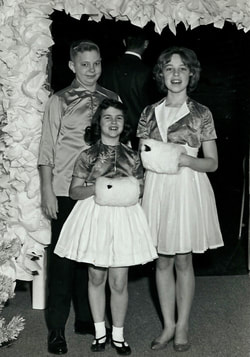 Cory, Betsy, Tanya singing for Christmas
This picture is of the kid's trio I sang with from the time I was 4 years old.  My aunt Janie Thompson, was always on the look-out for interesting acts to put on her shows.  I remember the juggler who could keep all kinds of things flying in the air and could also balance tables on his chin.  Then there was the dancing marimba player.  Also, the accordion player with the lightning fast fingers.  One of my early memories was standing at her elbow at the piano, my eyes level with the keyboard.  She was teaching me to sing a harmony part to "Jingle Bells."  She said, "Betsy, all you have to do is watch my little finger.  Listen closely, and sing the notes it plays."  So I did.

​          Aunt Janie, who trained many entertainers that traveled the world from Brigham Young University (Young Ambassadors, Lamanite Generation, and other shows), had us tour with some of the local shows. As I recall, we sang on a lot of Christmas shows and Patriotic shows.  This white dress got a lot of use -- we had a turquoise green silk jacket with a muff for Christmas, an itchy pink woolen sweater for Easter, something red and blue for the Fourth of July and little pinned on flowers for other times. 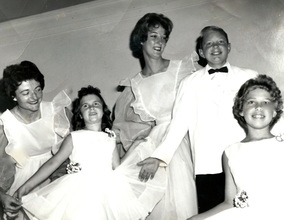 Panorama 4th of July Show 1960 with Betsy, Cory, Tanya and Diane Chatwin (left)
The picture on the right was used to advertise the Panorama Fourth of July Spectacular held in Provo Utah in about 1960.  My Aunts Dorothy and Janie co-directed this show.  Who could have known that years later my path would cross again with one of the people in this photo.  The dancer on the far left had been on shows with my Aunt Janie during the late 1950's.
​          When I moved to Salinas, CA in the early 1990's, that beautiful dancer, Diane Chatwin, was doing the choreography for Ariel Theatrical, a children's theater company there.  I had remembered this picture, and one day I brought it to show to her.  She was amazed to remember, but was delighted that we would meet and work together again.  What a small world! 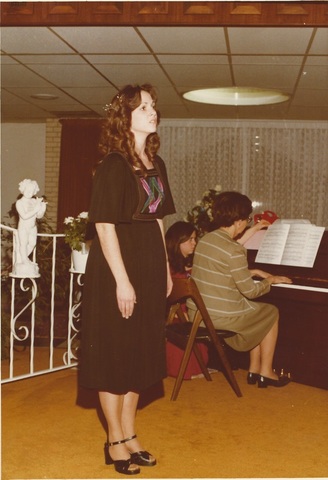 Janie Thompson accompanying Betsy Lee Bailey 1978
Janie had a unique talent for song arranging and fitting clever lyrics to tunes.  She taught me more about songwriting and show business than I learned in any of my college courses.  I attended BYU and studied Vocal Performance and Pedagogy and Composition.  While at BYU I did solo work, and sang in many choirs and performing groups. Somehow I also managed to find time to do some Musical Theater and Opera. I also sang in a dance band.  After graduating, I got married and embarked on new adventures with my husband Ellis.  I spent our early married years juggling babies and teaching piano and voice lessons. Fortunately, I also had many opportunities to sing and to direct shows.
When my children were in Elementary school, I volunteered to direct the school Holiday shows with hundreds of children.  That's when I figured out that I was a composer.  I would search and search for just the right song, only to run out of time, so I just wrote my own.  One day, I turned around and looked at the stack of stuff by my piano and discovered I had written enough to call myself a songwriter.  Writing plays came later.  I learned a lot about what goes into writing a good show while I worked with Gail Higginbotham.  Those skills were put to use when I worked for Patty Richardson and she wanted me to direct the summer camp for the youngest age group.  What exactly do you do with 2 five year old boys and 7 girls under the age of eight?  I couldn't find a show that met our mission and criteria, so in desperation one weekend, I wrote Stone Soup.  Actually, I have really enjoyed being able to tailor a show to the specific talents of and the number of kids we had at the time.

So, that's enough about me.  Hope you will enjoy mounting a production of your own with one of these shows.  All it takes is some creativity and determination, oh, and of course, HONESTY, KINDNESS, SINCERITY, BRAVERY,  INTEGRITY, COOPERATION, appreciation of FAMILY, tackling your FEARS, and doing some good hard WORK.